“Listening is the neglected stepchild of communication.” 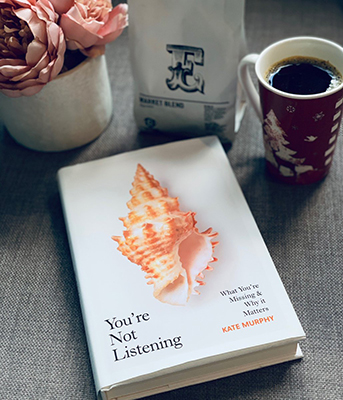 Have you ever been bored when someone is speaking to you and counted down the minutes until you could extract yourself? Turns out, part of the problem could be you, or at least your listening skills.

The author of this book, journalist Kate Murphy, shared many examples of how she, and others, have uncovered some wonderful stories or resolved issues that wouldn’t have happened if they hadn’t listened well. Murphy suggests we can uncover more interesting stories and information if we give the speaker time to talk, stay curious and ask them questions that delve further into what they’ve already shared.

I was reminded of my elderly neighbour. Not long after we moved into our house, she invited me in for a cup of tea – a rare event, especially in London! I heard a fascinating story about how her husband was part of the resistance in Poland during World War Two and escaped a train headed for a concentration camp, eventually finding his way to the UK. A story I wouldn’t have heard if I hadn’t accepted her offer to sit down and listen.

“Your dog can ‘listen’ to you. Siri or Alexa can ‘listen’ to you. But ultimately talking to your dog, Siri or Alexa will prove unsatisfying because they won’t respond in a thoughtful, feeling way, which is the measure of a good listener.” Data suggests that listeners responses are emotionally attuned to what the speaker is saying less than 5% of the time. However, you can cultivate self-awareness through paying attention to your emotions while in conversation and recognising when your fears and sensitivities may hijack your ability to listen well.

If your friend loses their job, rather than saying ‘You’ll find something soon’ or ‘I got made redundant too once, it was awful’, listen for what seemed to affect them most and ask ‘How are you feeling about it?’ or ‘What are you worried about?’. For example, ‘It sounds like you’re really worried about how to tell your family?’

Over brunch, we shared times when we hadn’t listened well and spoke about the chapter on supporting rather than shifting the conversation. Where, rather than taking a conversation in a different direction or shifting it to your own interests, you build on what has already been said. So, for example, when someone mentions their dog escaped, rather than talking about a time your dog escaped too, you could get curious about their situation and perhaps ask whether they found the dog or what happened next.

Murphy recommends avoiding these common listening pitfalls: suggesting you know how someone feels, identifying the cause of their problem or telling them how to solve it, and minimising their concerns or bringing a forced positive perspective. Also avoid asking leading questions such as ‘Didn’t that piss you off?’, ‘Don’t you think that…?’ or adding ‘Right?’ after you make a statement. By getting curious about their experience and how they feel may lead the person to uncover insights they didn’t realise they had.

It is also not about agreeing with someone. It’s about accepting the legitimacy of their point of view, that you might have something to learn from it, and the possibility that there could be multiple truths. That’s certainly been felt in the digital world, which she points out is one of the reasons we’re listening less and taking less time to have an actual conversation with others. “The ability to listen to anyone has been replaced by the capacity to shut out everyone, particularly those who disagree with us or don’t get to the point fast enough.”

It can take some effort and mindfulness in conversations to think about how we listen. After reading the book, I believe everybody can find something to work on to improve their listening skills.

Join us for the next Business Book Brunch for International Women’s Day on 27 February at 9.30am.