As Kiwis we have a certain ridiculousness about us – you just have to look at some of what we report on in the news. What other country running a Penguin of the Year Competition would make international news? 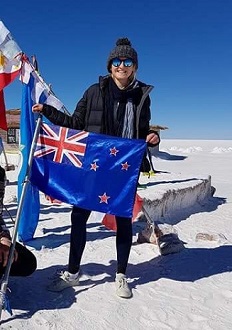 Melissa Roberts reckons it’s something we need to make the most of, especially in the UK office environment. “It’s nice to accept that we are a little odd, but it’s about making it work to your advantage. People find it quite endearing.”

As well as being able to keep her colleagues in the television and advertising production industry amused, Melissa is also one of our invaluable volunteers working on the events side. She helped pull together our amazing birthday event earlier this year, and believes events and production are fairly similar – “it’s often just herding cats.”

And it sounds as though she’s always been good at that. Growing up back home in Auckland, she spent her free time writing scripts for her younger sister to (often begrudgingly) perform while she recorded them on the family’s old VHS camera.

This set her up for a career in the industry. It was no surprise, given the positive high energy exerts, to hear that one of her many roles as a freelancer has included a stint for Les Mills International helping them produce group fitness videos.

Apparently you know you’ve made it in production when someone else puts a coffee in your hand. For Melissa that happened on the set of her last shoot in NZ. So it only made sense that she packed up and moved country to start from the bottom up again – she’s still waiting for the coffee here.

“You learn to pick up a lot very quickly in the industry, but I’d say one of my standout accomplishments would be being able to carry coffee trays stacked three high without spilling them. I have tiny hands, so I reckon that’s quite impressive.”

Like many of us, Melissa was looking for the next challenge and new opportunities. After two months through South America with a friend from back home, she landed in London last year to a place that was only as familiar as what she’d seen in the films she enjoys watching - and over-analysing the production aspects of.
“I’ve really enjoyed getting to know my own version of London. There were places that felt a bit like an empty film set at first, but now so many places feel wonderfully familiar and remind me of time spent with friends.”

And the network has been a sort of safety harness right from the beginning. “Living in London is like an extreme sport; the highs are so high and the lows can be very low. The great thing about the network is it’s there if you need it. You can choose to be really involved, or you can dip in and out; knowing you’ll always find a great group of Kiwi women there on your return.”

She says being a volunteer has also allowed her to take more risks on ideas than she would in a paid employment role. “I normally organise what happens behind the cameras and the people who operate them; but when Chef Peter Gordon wasn’t going to be in London to speak at the 10th birthday event, I put my hand up to record an interview with him. Having not operated a camera since university I was somewhat nervous, and had to remember to focus the shot and not get distracted by the beautiful interiors of Peter’s east London home.”

Melissa says her biggest achievement was making it over to the UK – despite battling health issues, her strong will and determination won over. She knew it was now or never and something she had to experience to progress her career and see the world.

“I still don’t really know exactly what I want to do at the end of the day, but the fact that I’ve made it here when I thought I wouldn’t, I’m okay with figuring it out as I go along.”
And when it comes to choosing between London and Auckland, Melissa says there’s no question that New Zealand is home.

“I’m not done yet though. There’s still more to come and I feel very fortunate to have that option.”